Less is the new more. Marie Kondo is just the latest incarnation of a bigger trend toward living more with less. Yet minimalism is not without its critics. Some have accused it of being a luxury of the upper middle class, a subtle form of virtue-signaling akin to veganism. Others guard their beloved possessions from minimalist scrutiny with a fervor bordering on obsession. Marie Kondo, for all her joyful, pixie-like charm, recently found one group of Americans who weren’t having it  – book lovers. Her crime? Suggesting that you really only need about thirty books.

As an avid reader, I assume she means per subject.

Confession time: I consider myself a minimalist-enthusiast — in theory at least, if not always in practice. I love throwing things away, or better yet not purchasing them to begin with. I’m not particularly fastidious in my cleaning habits, but clutter certainly stresses me out. Part of me dreads each Christmas and kid’s birthday party, anticipating the inevitable tsunami of plastic crap that I will have to accommodate until I can safely donate it to Goodwill.

But for me, minimalism is about more than decluttering, more than tidying up; it’s about taking the time to reflect on what’s truly important, and then making time for it. It’s about rejecting the reflexive materialist consumerism that engulfs our culture. It’s about spending time in nature and investing in human relationships. It’s about eating healthy food made from a few natural ingredients versus fast food and processed snacks. (It’s about failing at all of these occasionally, but trying to keep myself on track.)

I have always felt that my minimalism was highly compatible with my Christian faith, but recently I decided to investigate this further. My motive: I was trying to adapt a lesson I had used with my high school history students for a Sunday school class.

First, let me explain the lesson.

While my reading list is mainly fiction, history, and philosophy, I do listen to a few self-helpy podcasts, including The Minimalists and The Art of Manliness. After both podcasts interviewed James Clear, author of Atomic Habits, I decided to do a goal-setting/ prioritizing lesson with my students on their first day back from winter break.

I started by asking my students why most New Years’ Resolutions fail. They came up with a great list, including lack of willpower, lack of support, bad environment, unrealistic goals, and waning enthusiasm. Then I helped them set monthly goals using a template that allowed them to break their monthly goal into four weekly milestones. We discussed James Clear’s contention that success is more about building good habits than having great willpower. They were with me so far.

Then I decided to make it more concrete, based on a story I remember hearing from another teacher. I brought in a big pitcher, a smaller canister, a bag of lentils, and six bouncy balls of varying size. At the beginning of the demonstration, I placed the lentils and bouncy balls in the pitcher, as shown below. 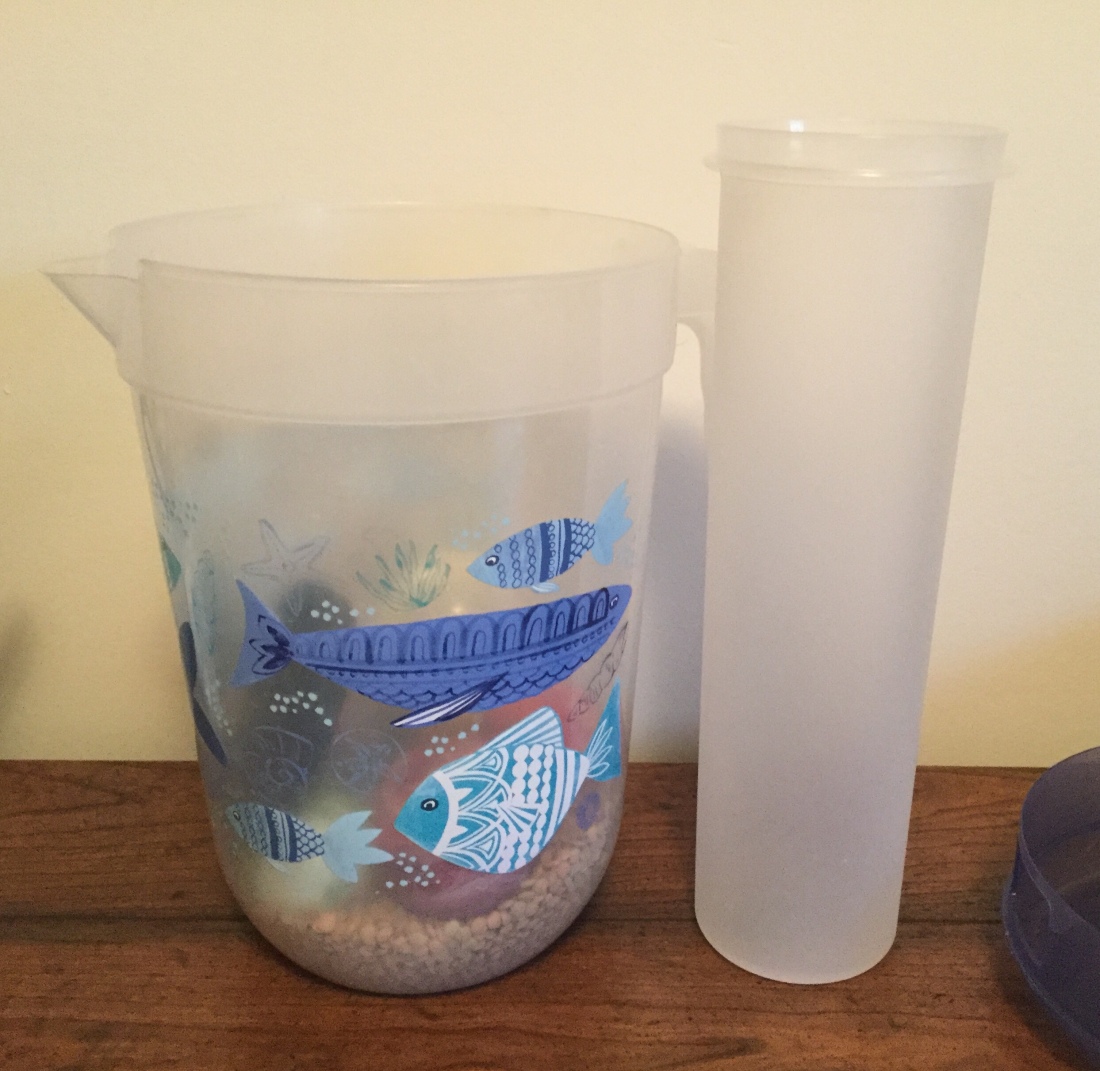 I asked a pair of student volunteers to attempt to transfer the contents of the pitcher into the smaller canister. Many students chuckled at this, clearly thinking it was impossible. In most of my classes, the first group tried to add a little lentils, then a bouncy ball, then more lentils, then another ball, and so on. They were able to fit four or five of the bouncy balls, but not the sixth. They certainly couldn’t close the lid.

I congratulated the first group on their effort and called up another pair of volunteers. This time I instructed them to fill the canister with lentils first and then see how many bouncy balls fit. The result: only three of the six. 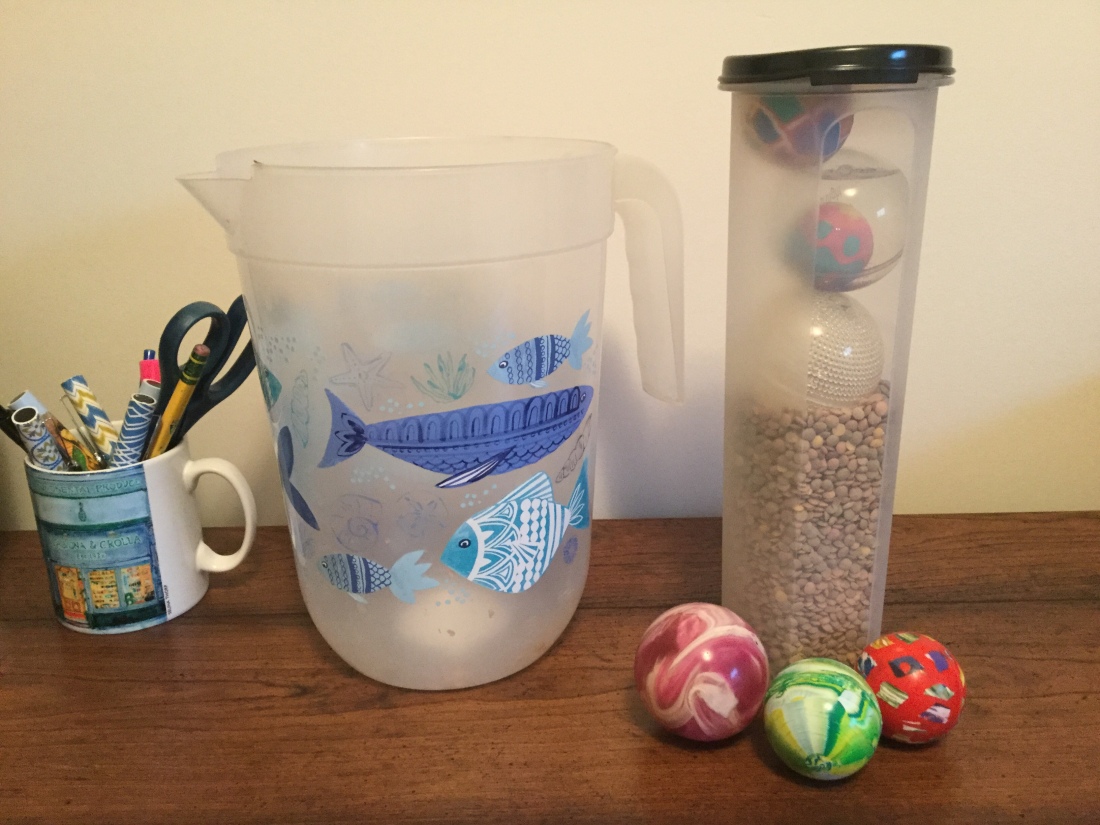 Then I asked my students to predict what would happen if I put the balls in first before pouring in the beans. Many doubted it would work. To the amazement of some, I poured the lentils into the container of bouncy balls, shaking it ever so slightly to allow the beans to slip through the open spaces. It’s not often that high school students are impressed, but this was one of those times. 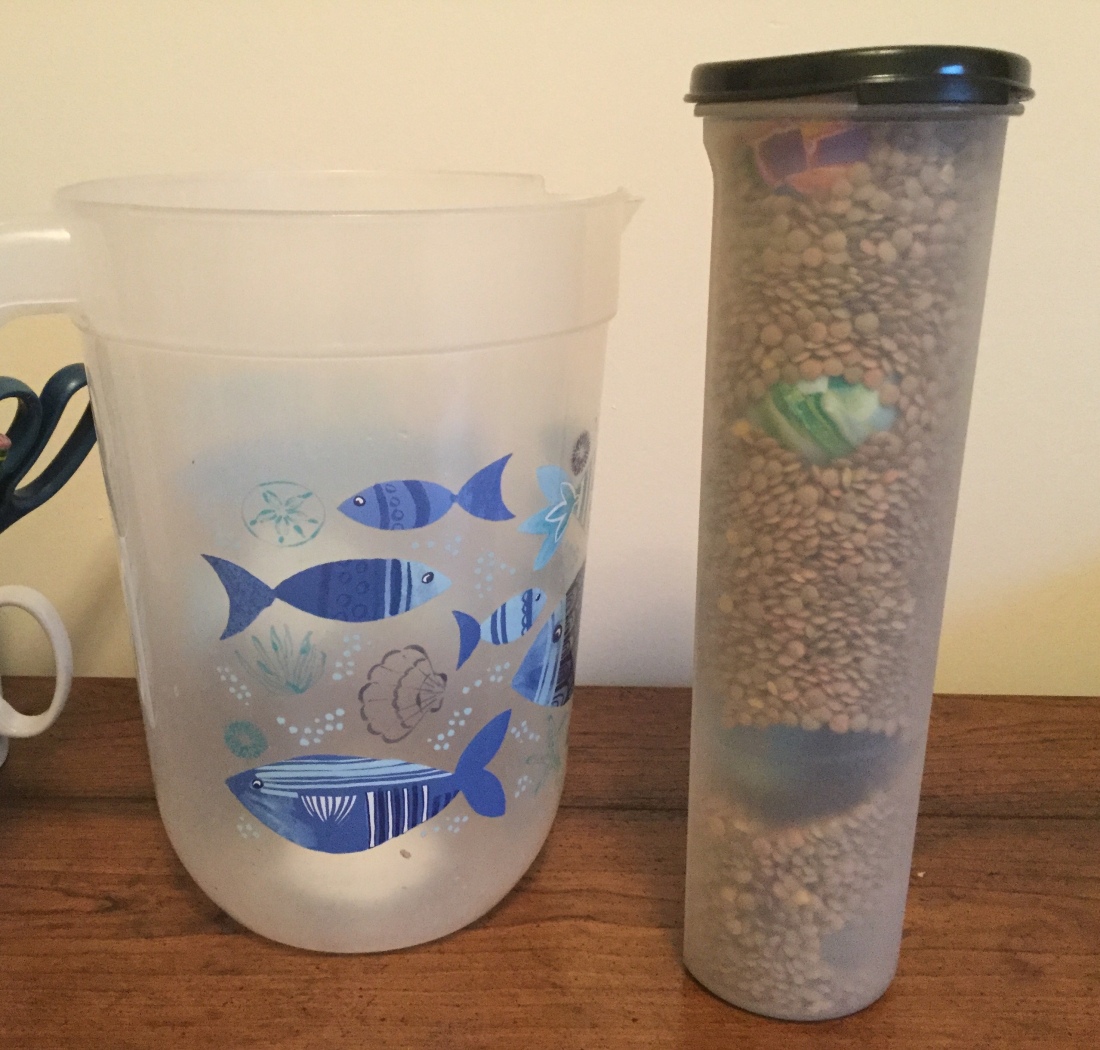 We then discussed what it all meant. The bouncy balls, I explained, were their priorities: school, family, career. The lentils were the little things – the Netflix shows that turned into all-day binges, the five minutes here or there scrolling through social media accounts that inevitably add up. They had to put the big things – their priorities – first in order to achieve their goals. To paraphrase this Laura Vanderkam TedTalk, “I don’t have time for X” is basically code for “X is not a priority for me right now.”

They got it. They liked it. I patted myself on the back for a good day-one lesson. But then I had to figure out some way to adapt it for my Sunday school students.

My biggest help came in the form of this excellent article by Haley Stewart in Public Discourse. In The Soul-Saving Grace of Christian Detachment, she writes:

If our pursuit of simplicity is not informed by the concept of Christian charity, focusing on mere minimalism will come up short… I can spend weeks decluttering my house, and it will certainly be more pleasant to inhabit our space with fewer items inside. But it will be an empty exercise if it is separated from the spiritual life and our obligations to God and our community. We all can and should take a look at how we view our possessions, but not simply so that our homes can be minimalist dreamlands. We should pursue detachment to “stuff” for a greater purpose: ordering our desires so that we can love God and other people.

In a recent Minimalists podcast, a caller complained that he had followed the rules of minimalism but was still depressed and unhappy. The podcast hosts, Joshua Fields Millburn and Ryan Nicodemus, tried to explain to the caller that minimalism was not in itself the answer to everything. Of course it’s not. Because secular minimalism looks like this: 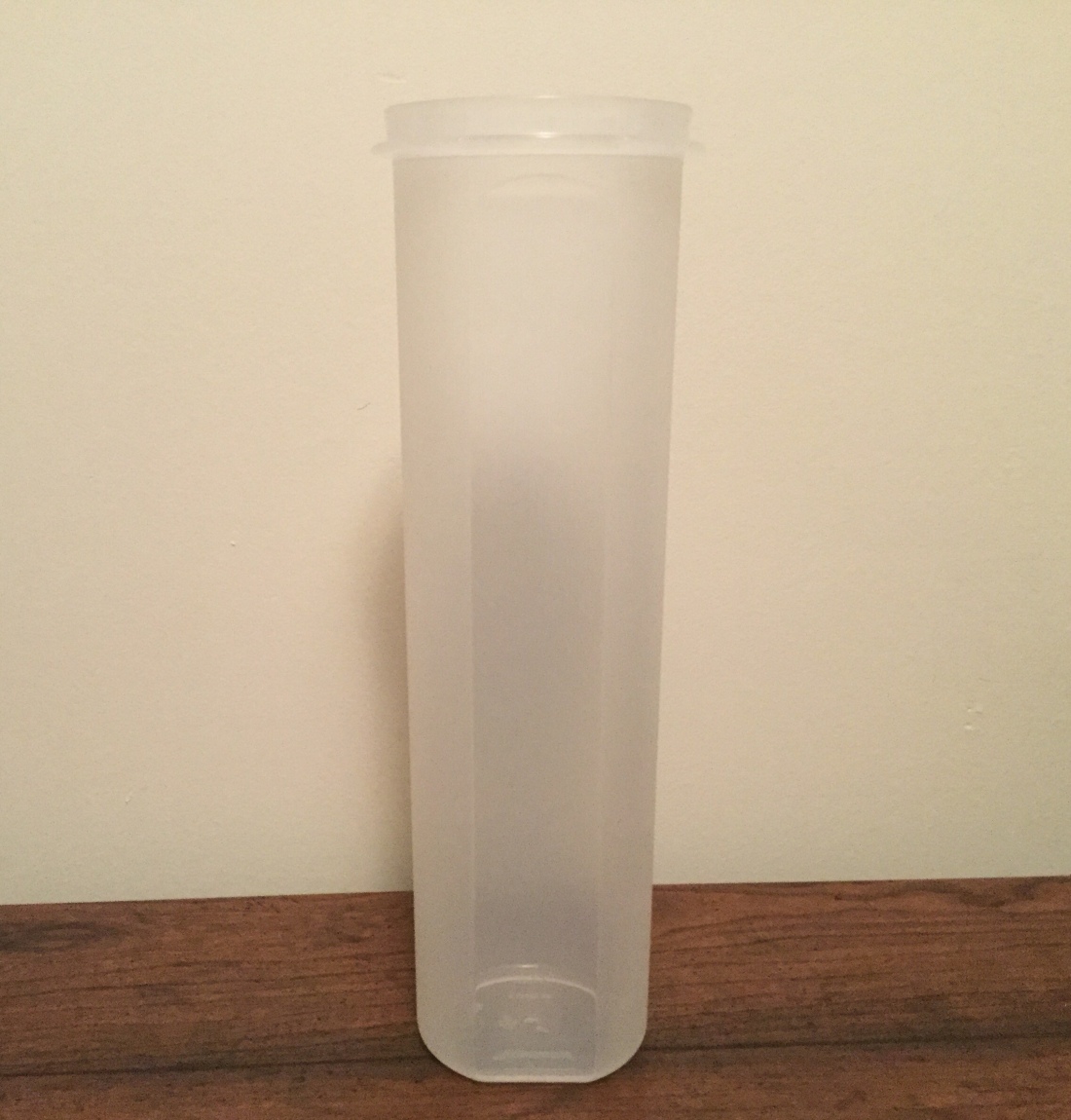 It’s an empty canister. Or maybe there’s one ball inside – the one devoted to “me.” That’s like a starving person having one bite of food; it’s not enough to satisfy you. It’s not enough to fill you up.

A Christian minimalist understands that the goal is more than just my individual fulfillment because “I” am more than just an isolated individual. I am a child of God and a member of a larger community, with real obligations to both.

We all need things to survive (food, shelter, clothing), but we can easily fall into the trap of greed and excess. We forget that things are only means to more important ends. We fall in love with our possessions. This can be bad, very bad. As the Minimalists say frequently on their podcast: “Love people and use things, because the opposite never works.”

This insight is not unique to religion in general, nor to Christianity in particular. Buddhism also discourages worldly attachments. Marie Kondo draws upon centuries of Shinto wisdom. But I would say that Christianity offers the best and most complete framework for implementing minimalist practices (though you would never know it by the way most American Christians live).

As a Christian, nothing should come before my faith – not my nationality, not my political ideology, not even my minimalism. But if minimalism is really about putting things in their proper order, then nothing could be more Christian. Consider these verses:

But godliness with contentment is great gain. For we brought nothing into the world, and we can take nothing out of it. But if we have food and clothing, we will be content with that. 1 Timothy 6:6–8

Then He said to them, “Take heed and beware of covetousness. For a man’s life does not consist in the abundance of his possessions.” Luke 12:15

Some of the happiest people I know have big families with lots of children. Their houses are cluttered. Their lives are messy. But their treasure is in each other and in heaven, not in their possessions. They may not be living the minimalist dream, but they certainly seem to have their priorities straight.

Personally, I need a little help in ordering my life. This includes staying as clutter-free and tidy as possible. But I don’t judge the mother of eight whose kitchen table is a bit messy. I try not to judge in this sense at all, though I do pity those who let material possessions and the acquisition of status dictate their lives.

Failing to prioritize God and relationships is like eating a diet of only fast food. Your life might seem full, but it is ultimately empty of the things that matter — the nutrients you need to survive.

When I taught my Sunday school lesson, I reminded my students that faith and relationships should be the first bouncy balls in their containers, then their personal goals and ambitions. And really, who needs the lentils? The canister sure looks better without them (although it wouldn’t spell disaster to allow a few beans to trickle in). It is human nature to fear for one’s future security, and to seek refuge in the things we think we need. We should thank God for all He has provided, and trust that He will continue to do so in the future. We should remember to ask only for our daily bread, not a stockpile. 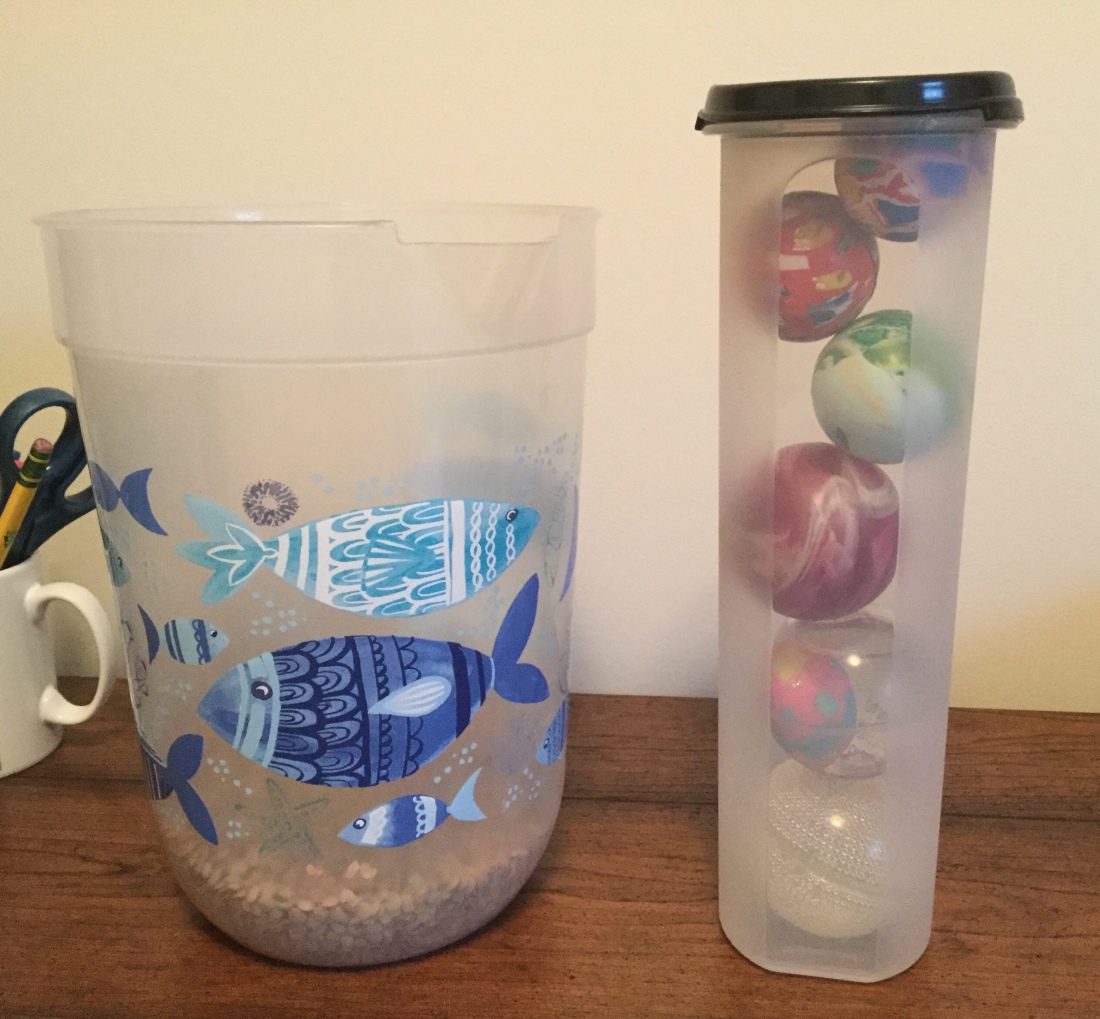 One thought on “Declutter Your Soul with Christian Minimalism”